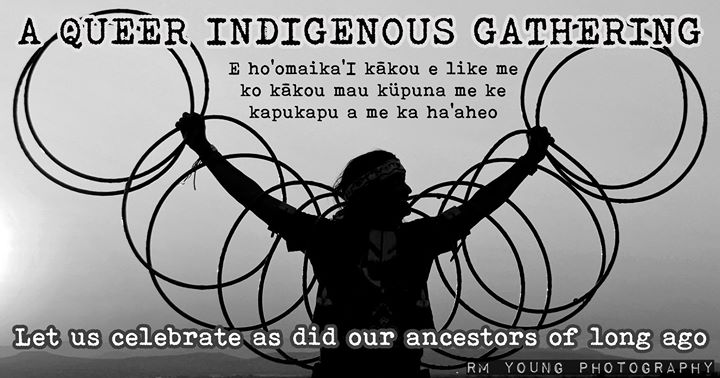 “Allowing native stories to be told by Indigenous folks is more powerful than any article or second hand experience,” exclaimed Darius Kila,  one of the announcers at the event and a student enrolled in the Queer Indigenous Studies course. “Indigenous stories matter and this event allows that to happen.”

Kila looks forward to in future gatherings allies of Queer and Indigenous people. “The most beneficial part is the gathering of different folks from all different backgrounds,” he said.

The Queer Indigenous Gathering is an annual gathering that took place in the Stevenson Union Rogue River Room last week on Wednesday, March 14. This years Queer Indigenous Studies (QIS) course, supervised by Dr. Brook Colley, orchestrated this event as their final project. The theme was “Let us celebrate as did our ancestors of long ago.” Brent Florendo opened the night with the traditional flag song, which ended in the presentation of a beautiful flag, decorated with eagle feathers. The students of the QIS course announced throughout the night and introduced each speaker. We started with Amanda Canty, who shared a number of very moving poems. She is Blackfoot and Cherokee, she is also an Activist, Restorative Justice Specialist, Educator, and Spoken word artist. Something she said while she spoke was “return to remembrance”, this really tied together the theme of this year’s gathering.

Kenny Ramos, a theater artist and activist from the Barona Band of Mission Indians spoke passionately and about health, education, and his advocacy work. Ramos focused “queerness” and Indigenous non-heteronormativity. His voice brought a new perspective to the QIG as he expressed troubles with his acting career regarding his “queerness” and Indigeneity. “American Indians are around, we exist,” he said. Ramos then defined he term “LGBTQ2.” The “2” stands for two-spirit, which is a Native concept. It means: identify as both, male and female, spirits. Ramos concluded, “It is not what you do in the teepee, it is what you do out[side] of it.”

The final speaker was Jamaica Heolimeleikalani Osorio (Kānaka Maoli). This individual focused on her Native Hawaiian heritage. This was the first time that Southern Oregon University’s Queer Indigenous Gathering had a Native Hawaiian speaker. Osorio is a poet and activist. She explained how to be Hawaiian is to be queer. In her Hawaiian language, there is not a word for “gay” or “queer” because it coexists with simply being Hawaiian. Then, all of a sudden, she started to sing. The crowd was not expecting that transition. As she sang the Native songs of her people, students joined in with the familiar songs. They sang along and connected with their culture and community away from home.

The end of the gathering was emotional as Doctor Brook Colley was recognized for putting on the gathering. So moved by the turn out of the gathering, Professor Colley had tears in her eyes while thanking, not only the speakers and contributors that made this event possible, but also, the Queer Indigenous Studies students that worked at her side to make this event possible. After the exchanging of blessings and gifts, Brook Colley left the audience with, “The ending is the beginning”.