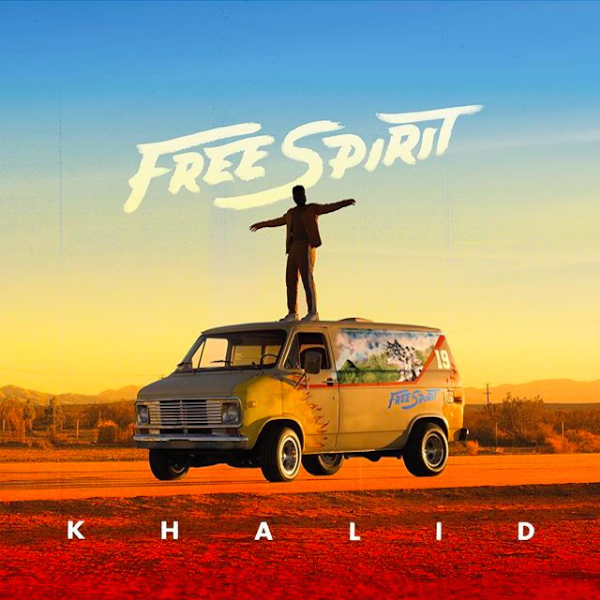 Like many of his contemporaries, R&B artist Khalid is an artist of the music streaming era. As a teenager, Khalid began his career by posting music to Soundcloud. In 2016, his debut single “Location” burst onto the pop music scene and was certified quadruple platinum after reaching number 16 on the US Billboard Hot 100 chart. This sudden, meteoric success represents of one of the greatest boons of music streaming: every artist has the capability of achieving mainstream success, even without label support or established industry connections.

These advantages, however, come with some downsides. Many modern artists have seemingly forsaken the pursuit of crafting a succinct album experience. Instead, contemporary pop artists often lean in favor of jam-packing in the most material into a single release, in hopes that at least some of the tracks will stick.

That’s not to say that the album is completely devoid of any enjoyable material, though. In particular, the first half of Free Spirit’s 17 tracks contains a number of well crafted modern R&B tunes that underline Khalid’s strengths. The album’s lead single “Talk” showcases Khalid’s knack for catchy lyrical refrains, and is further strengthened by a glossy, buoyant instrumental courtesy of British production duo Disclosure. Khalid expresses a simple yet salient sentiment on the songs chorus, as he reflects on the importance of communication in relationships. “Can we just talk?/Talk about where we’re going,” Khalid queries in a gentle falsetto.

“Better” similarly stands tall as one of Khalid’s more potent offerings on the album. The track features a contemporary trap beat imbued with vintage flair thanks to the liberal uses of a vocoder. Alongside “Talk,” this track in particular is poised to rise to the top of Spotify playlists. Khalid’s voice melds effortlessly with the instrumental, and rises to a powerful crescendo on the chorus. “Nothing feels better than this,” Khalid sings, proclaiming the passion he feels for being in a casual sexual relationship.

Even some of the deeper cuts on the album are enjoyable. “Twenty One” offers a bit of variety in the second act of the album, bringing listeners back to attention with a snappy, plucked bass line. Khalid once again explores themes of youth, reflecting on the rite of passage that is turning 21 years old in America, and the issues that arise with using alcohol to self-medicate.

Yet, as the runtime of Free Spirit drags along, it becomes increasingly apparent just how bloated the album is. At 17 tracks long, it’s hard to imagine that anything was left on the cutting room floor. Tracks like “Paradise” and the titular “Free Spirit” pass by without making much of any impact- but at the very least, they fit.

“Outta My Head” stands out, but not for a good reason. The song features a strangely ham-fisted attempt to squeeze in a soaring John Mayer guitar solo. It’s cheesy at best, and it’s a departure from much of the other more tasteful guitar work on the album at worst.

There’s a good album somewhere within Free Spirit, amidst all the clutter. The problem is, making good albums isn’t a priority any more for some contemporary artists. It’s enough to have a few strong songs buttressed between a slew of other unmemorable tracks, and Free Spirit definitely fulfills these criteria.

Is this trend detrimental to music as an art form? That’s a discussion for another time. What can be said for certain is that the few standout tracks on Free Spirit will maintain Khalid’s momentum and propel him to the top of mainstream stardom.