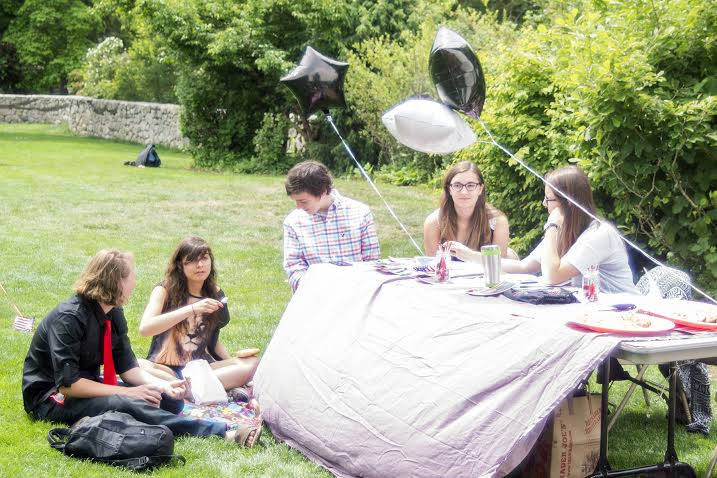 Saturday morning in Lithia Park, the surreal sounds of a hurdy-gurdy lured people to a small table, where a few students were cheerfully handing out homemade cookies in an effort to find supporters for the Schneider Children’s Center, “Today, we are putting on an event with various acts to try to help save the Schneider Children’s Center,” said ASSOU Arts and Performance Senator Hayley Thirwell. “We need residents in Ashland to understand what’s been going on with the center, because it’s being hidden away from a majority of the people in town. We are looking to get 300 signatures by the end of the day, and Mark Denny will be bringing these to the cabinet.”

As Thirwell and others were gathering signatures, concerned parents, teachers and student employees of the center spoke to passersby in an effort to spread the word. Alexis Hidalgo, a student at SOU and a student aide at Schneider says, “In the last two years, I’ve worked in all the classrooms, and I work in the infant/toddler program now. This will have a personal impact more than anything, as I have had such a great two years there and I’ve gotten to see so many kids grow and change and I’ve seen the important work Schneider Children’s Center does, and how big of an impact we have on kids.”

As the deadline of June 12 approaches, the scramble to keep Schneider open for the next school year is reaching its apex. Nikki Huen, one of the teachers at Schneider Children’s Center said, “There’s a lot of different people doing a lot of things and a lot has to happen in a very short period of time.” On what may happen next year, “Nobody has talked to us about it. There is this gap year that there’s nothing for us. Everyone’s got to figure out how to survive on their own. I’ve applied for two other jobs, but it’s not what I want, I want to stay there, I’ve been there 24 years.”

Tara Roberts, who has two children at the center, found out in April that the center will close. “I was so excited to get my kids in, I thought they would be in there my entire career of going to school.” But now she is left searching for other childcare services, which for her, is not an easy task. “For my eldest, who is three, I am looking into the head start program locally, and also the community preschool. My daughter is 1 ½ and she is much harder to place. I probably won’t find as good of care, I know I won’t. It’s a great place.”

Unless a funding solution or compromise is revealed in the next two weeks, the fate of the center is inevitable. Ryan Brown, Head of Community and Media Relations for Southern Oregon University stated, “Effective June 12, 2015, the Schneider Childcare Center will close due to lack of funding. The University will continue to seek alternative funding sources for the 2015/16 school year, and if necessary, through the summer to try and keep on-campus childcare for SOU students. If alternate funding sources are not found by June 12, the current staff has been notified that they will not be retained, and the Schneider Child Care Center will close. But, thanks to the student referendum, the center will re-open in some capacity for the 2016/17 school year.”

As for now, Nikki Huen remarks, “We’ve been advising our parents to come up with plan B. We hope that if we stay open, they will come back, but that is very hard on kids, and that is a personal decision they have to make.”